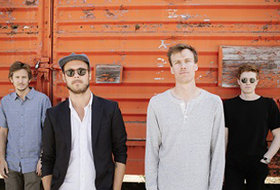 Sat. November 9th 2019 8:00pm @ Royal Theatre Victoria BC (All Ages)
Every song has a story. With Current Swell’s third Nettwerk Records release, When To Talk And When To Listen, these stories cut deep.

Grammy-winning producer Jacquire King (Kings of Leon, Tom Waits, Norah Jones, Cold War Kids, Of Monsters and Men, James Bay) produced the album over four weeks in two vastly different locales: Nashville and Vancouver. The former is where King lives and does most of his studio work; the latter is a ferry ride away from where Current Swell makes its home. Both cities have music at their core, which gave King and Current Swell common ground on which to build their new relationship.

Yet, tensions ran high early on. During the first night at Nashville’s famed Blackbird Studios, King cut short the sessions and told the band to come back when they had something worthwhile to say. Current Swell was talking loud and saying nothing.

A blunt, band-only meeting quickly cured what ailed them. They went back to their first-ever phone call with King months earlier, when they discovered he had an extensive list of questions and ideas for each song – long before they had ever even met.

The four friends returned the following day ready to create. “He said we had finally tapped into that spark he heard in the very first demos we sent him,” recalls frontman Scott Stanton. “It helped create trust. He knew as much about the songs as we did. He pushed us because he knew we had it in us to make a really great record.”

Like all good rock ‘n’ roll should, When To Talk And When To Listen touches on all facets of the human condition, from the heartbreak and spurned love of first single “It Ain’t Right” to a pair of songs about loss that form the emotional core of the album.

"Marsha" is about the inner dialogue Stanton often has with his mother, a piano teacher who died at 46 of breast cancer when he was in Grade 9. "She is still part of me in a way, so I often talk to her when I need advice,” he says. "I feel like my mom would be really proud of it.”

Band member Dave Lang wrote title track “When To Talk And When To Listen” when his father-in-law was nearing the end of his life. Lang and his wife were getting ready to welcome their first child around the same time, which felt like a cruel twist of fate. After taking stock of the reality he was facing, Lang says the words came pouring out.

"We knew he wasn't going to be around when our daughter was born, and he was going to miss out on meeting her. And I started thinking: 'What if that happened to me? What would I want to pass along?'"

Current Swell's track record in its home country includes two No. 1 singles on iTunes Canada’s rock chart and a Top 10 record on the commercial rock charts in Canada for 2014’s Ulysses. But all signs point to When To Talk And When To Listen – an album of rich songwriting and vibrant musicianship – casting a much wider net.

That means more pressure will exist. Which is why this album has to be unlike any Current Swell recording to date.

"For Ulysses, we jammed all the songs, went in the studio and played them," Stanton says. "For this, we started from scratch. We dissected everything. Out of any album we've done, this one really captured what I was hearing in my head."

“It Ain’t Right” is an apt example. Stanton infuses the album’s lead single with a keen eye for relationship details, the band rumbling away beneath him as it reaches an apex. “I thought you were different,” Stanton sings, highlighting the narrator’s serious interconnectivity issues. “I thought you were cool, but it ain’t right.”

The group as whole found a new level of confidence on the recording. Some of that can be credited to King, who pushed Current Swell to find a new side of their artistic selves, Stanton says. “He would never say something just to say it. But he always wound up being right. He was like a coach."

Stanton and Lang use one word - educational - to describe the process of recording separately at Blackbird in Nashville and the Warehouse in Vancouver. They are studios with rich histories - not to mention a client list that includes Bruce Springsteen, Red Hot Chili Peppers, AC/DC, Taylor Swift and R.E.M.

Current Swell had developed a comfortable way of recording until King came along. He succeeded in propelling them to greater heights, pushing the band to realize its potential. Urging them to dig deeper.

"Anyone can make an album," he said. "But we knew this record had to be good."